15 years outside one’s country would certainly bring a change in a lot of people. But for Jaiprakash Singh, he is as much an Indian as the rest of us who stay in the country. He can be best described through three aspects – sincerity at work, serve people in need and being rooted to the Indian Culture. 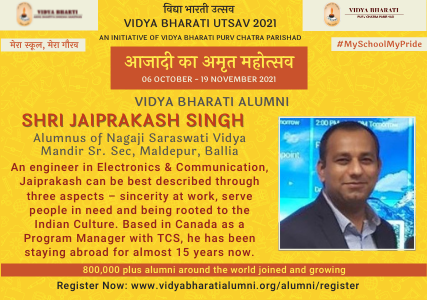 Jaiprakash, an alumnus of Nagaji Saraswati Vidya Mandir Sr. Sec, Maldepur, Ballia, joined the Vidya Bharati family as an infant. From the very beginning till his 12th class he has studied in Vidya Bharati School. After his 12th, Jaiprakash joined the UP Technical University to pursue B.Tech Degree in Electronics and Communication. Right after completing his engineering course he got recruited in TCS and moved to Bangalore. Having worked in Bangalore for about a year he was sent to UK. He stayed here for the next 4 years before moving to North America where he has worked in countries like Canada and United States and also a part of South America. 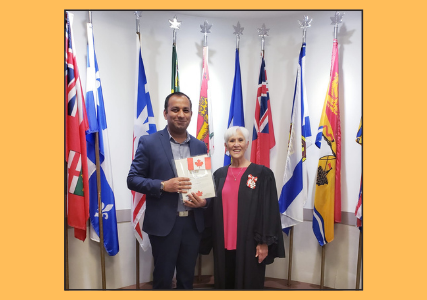 Presently, Jaiprakash is based in Canada as a Program Manager with TCS. “It has been over 15 years now that I am working with TCS”, mentioned Jaiprakash, who is currently handling a client who are the biggest producers of fertilizer across the globe. 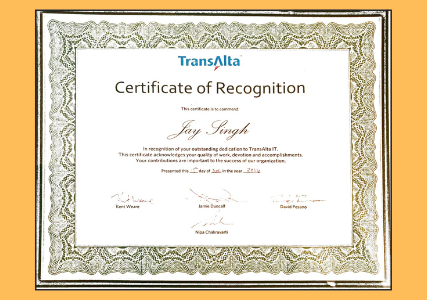 Jaiprakash has received several awards and recognition from most of the clients he has served for innovation and team management. “The leadership and thinking out of the box skills have been inculcated in me by my school, which is now reflecting through my work”, mentioned Jaiprakash. He also added, “As a young child in school, I was always motivated by my teachers to take part in co-curricular activities like sports, music, and social work, which has instilled self confidence in me”.

Jaiprakash was a bright student in school. For his outstanding marks in the class 10th examination he received the Pratibha Samman Award which was conferred to him by the then Ballia District Magistrate.

A study shows that one in every three children in India does not complete schooling. Jaiprakash, who is also a great social giver, feels that the very basis of society depends on the education of the children. He believes that each one of us, through our little efforts, each day can change the lives of many.

“Since I am not in India right now, I cannot physically support a cause here. So I financially help two NGOs there – Dream a Dream and Give India”, shared Jaiprakash.

Dream a Dream is an NGO which empowers children and young people from vulnerable backgrounds to overcome adversity and thrive in a fast-changing world through skill development and career connect programs. Give India works in the area of girl child education and orphan children. For the past 8 years he has been sponsoring education of 6 girl and 3 orphan children in India. “This gives me an opportunity to remain connect with the people of my country”, mentioned Jaiprakash who deeply carries the love for his motherland. 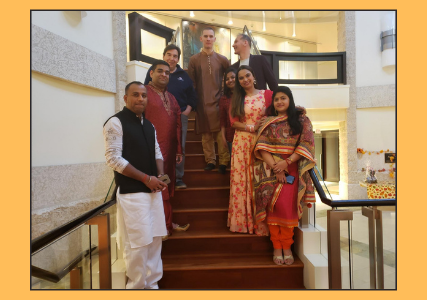 Jaiprakash has turned the last 15 years he has spent outside India into an opportunity to share with the world about the rich culture and heritage of the country.  He is associated with the Indian Cultural Association in Canada, which he used as a platform to promote Indian culture, history, importance of Sanskrit and Yoga.

“Wherever I was, whether it is UK or America, I never forgot our Indian festivals. I organized festivals like Diwali, Holi, and Independence Day and involved not only the Indians but also the foreign nationals to participate. These events gave us an opportunity to talk about the rich history of our country and the sacrifices of our great national leaders”, mentioned Jaiprakash.