With the world moving towards cleaner, economic and sustainable power sources, solar energy is becoming vastly popular. In a country like India with ample sunlight throughout the year at most places, solar energy, if harnessed correctly, has the potential to become the post popular source of renewable energy with zero emissions. It has the added advantage to reach and power even the remotest corners of our vast country with minimum maintenance.

Historically, The Rural Electrification Program of 2006 was the first step by the Indian Government in recognizing the importance of solar power. It gave guidelines for the implementation of off-grid solar applications. Since then the movement towards switching to this energy source has been slow initially, but with the rising cost of fossil fuels, increased requirement for more power and demand for cleaner renewable energy, has led to a boost in the demand for solar energy in recent times.

Alongside government initiatives, several individuals and corporate bodies have recognised the potential of this sector and doing pioneering work in this field. One such individual is Vidya Bharati alumnus, Sri Yashpal Singh Parihar from Madhya Pradesh.

Armed with his MBA degree he went on to work in several big MNC companies like Glaxo Smith Kline, Nestle India and Tata Chemicals. After securing work experiences for several years, in the year 2015 – 2016, he started his own company ‘Madhya Pradesh SOLAR 9’ which deals with solar energy and located in Madhya Pradesh. It is a franchisee of WAREE ENERGY.

Mr. Parihar is an environmentalist at heart and the main reasoning behind starting his business was to create a positive environmental impact and reduce the carbon footprint generated by the power and energy sector. In fact he estimates that through his work, he is helping to save approximately more than 5000 trees every year. For example by installing a 5 kilowatt solar system 5 to 10 trees are saved each year. 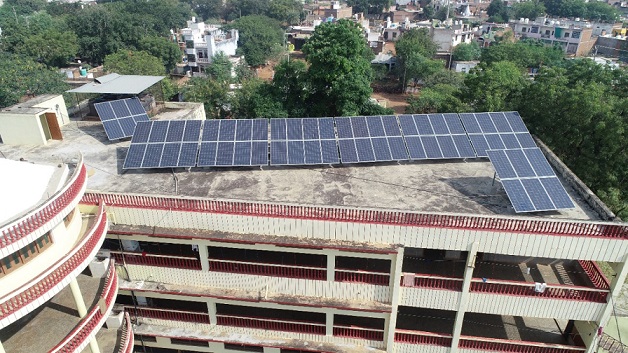 The business has been hugely successful and has successfully installed systems in factories in and near Indore. Recently he has installed a solar power system for his school. Before installation of the system, the school was incurring a cost of 75000 in electricity bill, which was reduced to zero rupees after installation of the system. In fact they are producing electricity in excess, which can be given back to the MP electricity board. Mr. Parihar is providing free maintenance up to 7 years to his school and installed the system at a discounted rate as well as providing them easy EMI facilities.

Mr. Parihar hopes to continue the good work and help out more Vidya Bharati schools across India in the future. He believes that whatever he has achieved in his lifetime, is because of his teachers and his school and feels privileged if he can give something in return.

If you are a Vidya Bharati alumni and would like to share your story with the community or give back to Vidya Bharati schools, kindly email us at info@vidyabharatialumni.org and we will be happy to reach back to you.