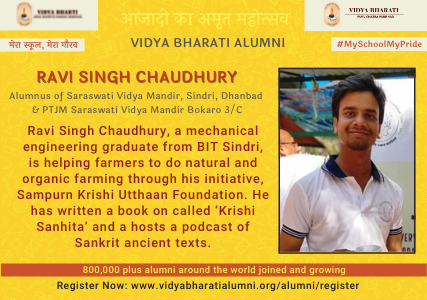 Ravi Singh Choudhary, a mechanical engineering graduate from BIT Sindri, joined Vedanta Sesa Goa through campus interview after completing his Btech in 2015 like any other student would prefer. However, after 10 months, he cracked the GATE examination and joined a PSU in Ranchi. While he returned to his town from Goa, he decided to utilize his native land for some organic produce.

While initially he was facing a number of issues, he realized how much problems the farmers must be facing on a daily basis. This is when he founded Sampurn Krishi Utthaan Foundation – a not for profit organization to collaborate and help in organic and natural farming. 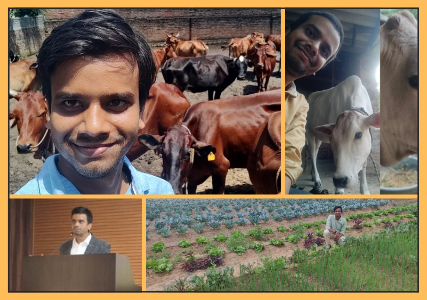 “I started with strawberry and sweet corn faming on my own farm land. After the corps was grown a huge crowd of farmers from the native villages came to my farm asking for suggestions and help. So that is how it all started – I helped them with step by step information of farming and also helped then to market their crops”, shared Ravi.

“I interact with the farmers and have established a sense of cooperative farming run by SHGs. We deal with Horticulture perishable items thus dealing in hyperlocal ecosystem and the method of Cultivation is Natural & Organic, and Indigenous Cow based farming”, mentioned Ravi, who is also writing a book on Natural Farming Practices called ‘Krishi Sanhita’.

Through his initiative, the Sampurn Krishi Utthaan Foundation, Ravi offers consultancy on livelihoods to NGOs, corporates and several housing societies. They have tied-up with Unmukt Urja as a social capital partner and are helping to extract Ethanol bio fuel from stubble burning in Punjab and training farmers to do natural and organic farming in Odisha.

Ravi also felt the importance of irrigation in farming and did an online course on irrigation technology. “I understood that the technical part of our farm is very much related to mechanical engineering. So it became easy for me to innovate and implement”, shared Ravi.

He further adds, “The knowledge that is required in farming like soil analysis or climate analysis or supply chain management is kind of an entrepreneurship work. A farmer is not merely doing a job. It requires a huge number of skill sets. We assume that farmers are poor so agriculture is very easy to do. I thought I can use my knowledge of even my school time. Whatever I have learned in school can be used in the farming sector”. 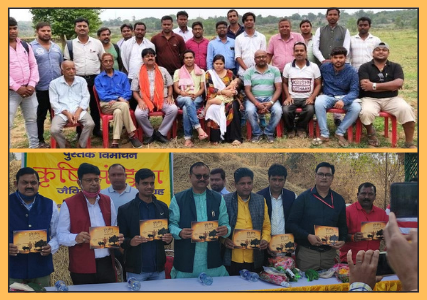 Ravi is associated with a lot of farmers today and his helping them with strategies to develop a farm. He also handholds new agropreneurs who want to come into this sector.

Ravi also hosts a podcast of Sankrit ancient texts where he explains the inner meaning of books like Agni Purana, Rigveda, Arthashastra, Tarka sastra and several others.

“All those who have ever studied in Vidya Bharati schools have got one boon. They all have interest in Sanskrit. I found a text called Vrikshayurveda which talks of advanced forms of agriculture of our ancient times. Somehow it got lost and I am trying to revive it into practice. While Ayurveda is for human health, Vrikshayurveda is for health of plants. After reading the book, I started this podcast which have audience from over 40 countries”, shared Ravi.

Besides farming, Ravi is also doing a research on indigenous cow – desi gopalan and decolonization of mind.

While many may thing that it takes a great deal of courage to forsake one’s four-years’ worth of degree and well-paying jobs to pursue something as basic as farming, for Ravi it is the highest reward to help change lives of the people.